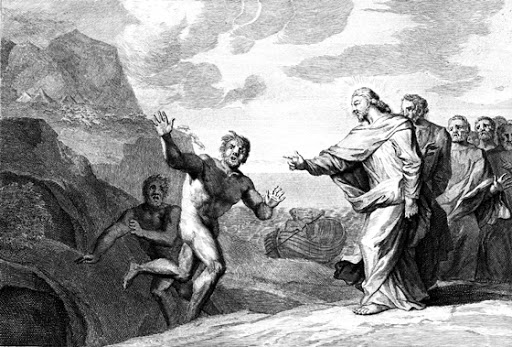 In this morning’s Gospel, Jesus encounters two men possessed by demons. Those demons recognize him, and in fear, they pleaded, “send us into the herd of swine.” Jesus grants their request. Those swine then run into the ocean and kill themselves.

Now, we live in a farming community. The idea of an entire herd being destroyed seems harsh or unnecessary. Many might even wonder why Jesus would cause such a burden on the people who owned the herd. However, we have to remember that pigs were the most filthy of animals to a Jewish audience. Thus, the pig was a suitable place for the demon. Filthy. Disgusting. Unclean. Good for absolutely nothing. Losing them to the sea would incur no loss in their minds because it was ridding the world of filth.

I think that stands out to me because the pigs ran into the sea of their own accord, which seems to indicate the demons perished with them. Jesus drove the demons from the men into the pigs, but even the pigs rejected them. They chose to die rather than be a host to that evil. Demons have no place in a world where the power of God has entered in and through Jesus Christ.

What does that have to do with us? What can we learn from this? With this in mind, the story reminds us that once Jesus has entered into our lives, there is no room for sin. Jesus tells us we are called to be Saints, to be perfect as the Father is perfect.  We have to drive sin out of our lives. Kill it. Even the smallest of sins will eventually build until they become serious and habit-forming. The moment we realize we are going down that path, we have to remove it from our lives, rush to Jesus in confession and allow His forgiveness to wash over us.

Too many see the confessional as a place of fear and defeat, but it’s a place of victory. It’s a place where we allow God’s mercy, which is calling to us before we ever step foot inside, to wash over us. He wants you to come to Him for healing and forgiveness. When we meet Him there with contrition and in repentance, we are saying to Him, “I give you permission to love me, to heal me, to give me your mercy and your love, and to forgive me.”  (Quote from Father Mike Schmitz)

St. John Paul the II once said: “It would be an illusion to seek after holiness, according to the vocation one has received from God, without frequently partaking of this sacrament of conversion and reconciliation.” We need to make confession a regular part of our lives, a frequent date with Jesus to not simply keep ourselves clean, but to lead us to life-giving water that is the Mercy of God.

A reflection on the readings for Wednesday of the 13th Week in Ordinary time: June 30th, 2021