Whose altar are you sacrificing on? 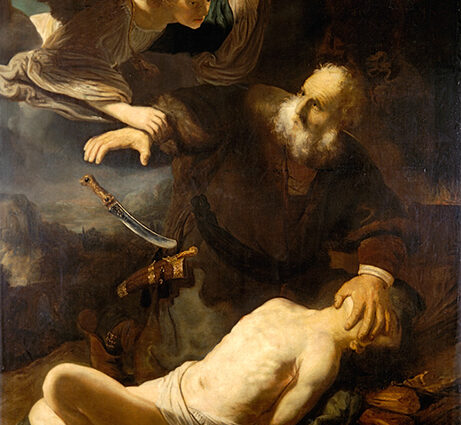 This morning’s first reading is a bit difficult.  Here we have God asking Abraham to sacrifice what it says is “his only son.”   But just yesterday we saw Abraham also push away his other biological son into the desert on the promise of God.  Here he’s already given up one son, and the scriptures tell us he’s greatly distressed at the thought of that.  In faith, he does as God asks of him.  He and Isaac go up the mountain, Isaac carrying the wood of the sacrifice on His back.  Then Isaac, seemingly willingly, gets on the altar and Abraham goes to carry through with the plan.

It’s shocking to us, isn’t it?   The thought of God asking for a sacrifice.  But that was what the other gods did.  All around Abraham were cults that offered their children in sacrifice to the false gods.  Abraham trusted as Hebrews tells us, “He reasoned that God was able to raise even from the dead, and he received Isaac back.”   Then God provided the lamb, trapped in the thicket with a crown of thorns, to replace Isaac.   So many images here.  Isaac going up the mountain carrying the wood of the sacrifice, Jesus carrying the cross.  The Lamb caught in the thicket.  Jesus the lamb of God, crowned with thorns.

In a single moment in time, God showed that He did not want child sacrifice.  What he wanted was obedience, trust, and relationship.  On the cross, Jesus finalized that covenant with us ending once and for all sacrifice of life.   Now we offer for eternity the sacrifice of the Eucharist, one singular sacrifice made present to us each time we are at Mass.

Yet, the world has hardly changed, our children are still being sacrificed on an altar, just under a different name.   The altar of financial stability.   The altar of careers.   The altar of contraception and “family planning.”   Abortion denies the cross.  It obscures the gospel behind cultural trends and sinful hedonism.  It tries to say “God has not provided a substitute.”  But we know better.  Mankind does not have to die.

That’s what sets our God and our faith apart from others.   Our God does not demand a child sacrifice and instead treats every life as precious, every heartbeat as calling out in worship to the Creator.    I’m going to close by simply quoting the Catechism of the Catholic church because this is what we believe, this is our faith.   There’s no wiggle room, the Catholic faith does not, and will not support abortion.

Human life must be respected and protected absolutely from the moment of conception. From the first moment of his existence, a human being must be recognized as having the rights of a person – among which is the inviolable right of every innocent being to life.  (CCC 2270)

A reflection on the readings for Thursday of the 13th Week in Ordinary Time: July 1st, 2021